Protesters brought Hong Kong to a standstill today (Aug. 5) as they waged a major citywide general strike in the latest escalation of their nine-week-long protest movement.

As the weekend of guerrilla protests across different districts of the city gave way to the start of the regular work week, protesters coordinated actions to paralyze train lines and block roads. Train service was disrupted across all major lines as protesters prevented train doors from closing and occupied platforms. Multiple attempts were made to temporarily block vehicular traffic at the Cross-Harbour Tunnel, a major link between Hong Kong Island and the Kowloon Peninsula. Some even drove in endless circles at a roundabout.  Tensions flared at various points as frustrated commuters criticized protesters for the chaos, and at least one car was seen driving through barricades put up by demonstrators.

Cars going round and round and round a roundabout in Tai Po, a suburban town in northern Hong Kong, as protesters launch a massive citywide strike. https://www.facebook.com/groups/TaipoTaipo/permalink/10162250424775245?sfns=mo … 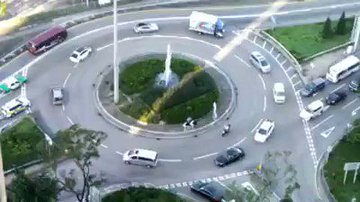 305 people are talking about this

Enjoy this story in the new Quartz app

Thanks for supporting our journalism! You’ve hit your monthly article limit. Become a member to help build the future of Quartz.

Get unlimited access to Quartz on all devices. Unlock member-exclusive coverage, CEO interviews, member-only events, conference calls with our editors, and more.

India has been hostile to NGOs for decades. Modi made it worse

What are the odds Facebook’s Libra launches on time?

Children adopted into American families come back to Mongolia